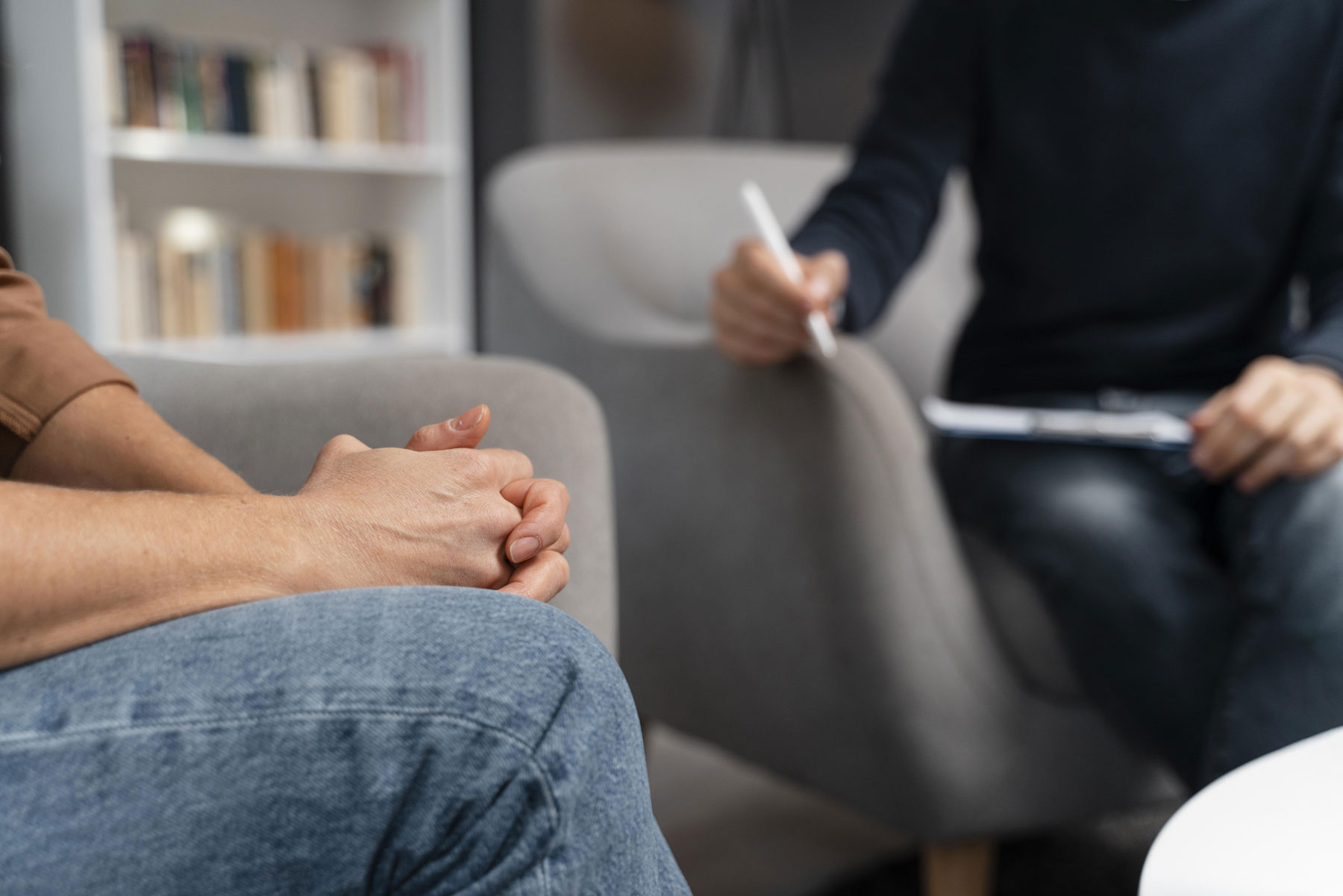 Do the current models of care respond to the needs in Mental Health, post-pandemic and what this means in health spending in the country?

It is no secret to anyone that the pandemic has exposed the crisis in mental health of the population in Colombia and in the world, has made visible and exacerbated the growing reality of individuals in coping with current events and suffering, as well as those crossed in the course of his life; Studies speak that “from the perspective of mental health, an epidemic of great magnitude implies a psychosocial disturbance that may exceed the management capacity of the affected population” (1) as we have already experienced from the point of view of the care of the virus and we began to show it from the point of view of the attention of the pandemic and post-pandemic psychological effects. It is said that it can be considered that the entire population suffers tension and anguish to a greater or lesser extent. Therefore, “an increase in the incidence of mental disorders is estimated (between a third and a half of the exposed population may suffer some psychopathological manifestation, according to the magnitude of the event and the degree of vulnerability)” (1) and Although not all result in a mental illness, if the low capacity of attention of the system and the lack of strategies for promotion, prevention and education in mental health in the existing care models, which today are based on pillars of mental health, have become evident. palliative care.

Although for many mental health may sound like an individual issue that everyone has to resolve, mental health is far from being an individual issue and it is absolutely a collective issue, given its nature, defined in the ENSM2015 as: subjective relational ( individual with others) and collective social (social cognition, recognition of others, family support and social capital) and given its negative social and economic impact, generated by the decrease in personal income, limitations to the work of the patient and their caregiver, that affect the productive capacity of a country and therefore its income and in the same way its spending on health due to: the high cost of its frequent and / or long disabilities and hospital stays, as well as the high cost of its treatments and / or medicines, a situation that is detrimental to the health system and the well-being and economic progress of Colombians, all this makes it relevant to ask ourselves: do the models of Attention and n Current health problems and growing needs of mental health in the country? The implemented models aim and work in primary care at: health promotion and disease prevention for this mental case, under the conditions dictated by the RES. 429 of 2016 Comprehensive Health Care Policy? Do current models promote educational activities that allow the population to strengthen and make adequate use of the psychological and psychosocial resources they have, allowing them to have a “good life”?

To address these questions, it is important to review the associated statistics:

According to the 2003 National Mental Health Study (7), 40.1% of the Colombian population between 18 and 65 years of age has suffered or will suffer a mental disorder at some time in their life. The National Mental Health Survey published in 2015, reports that 10 out of every 100 adults between 18 and 44 years old and 12 out of every 100 adolescents have a problem that suggests the presence of a mental illness (8). Regarding investment in mental health, the WHO reports that in many countries only 2% of total health resources are invested, with the average annual expenditure on mental health being less than US $ 3 per inhabitant and in the countries low-income, US $ 0.25 per capita, where the shortage of psychiatrists, nurses, psychologists and social workers are some of the main obstacles (4.9). Almost half of the world’s population lives in countries where there is one psychiatrist or less per 200,000 people and in low-income countries there is less than one specialist per million inhabitants (4,10). Rojas-Bernal LA, Castaño-Pérez GA, Restrepo-Bernal DP. Mental health in Colombia. A critical analysis. Rev CES Med 2018; 32 (2): 129-140.

Likewise, the Mental Health Analysis carried out in 2008 by the Investigative Team of the Health and Social Security Program of the Ombudsman’s Office indicates that Preliminary Study – “Medications included in the Mandatory Health Plan (POS) for the treatment of psychiatric disorders: Proposal for the Modification of the Form. It states that 30% of the Colombian population suffers from some psychiatric disorder that is a frequent cause of morbidity and mortality.

Thus, according to the estimates of the studies regarding the incidences in the increase of psychological disorders in situations of epidemics, we can say that the post-pandemic figures in Colombia could amount to 60% of the population, according to PAHO Mental disorders, neurological and substance use are the main contributors to premature morbidity and mortality worldwide, in 2010, the global cost of mental disorders was estimated at approximately 2.5 trillion US dollars; By 2030, this figure is projected to increase 240% to $ 6.0 trillion, investing in mental health has been shown to bring a substantial return, as every dollar invested in expanding treatment for depression and anxiety produces a return of 4 dollars in the improvement of the population’s health and work capacity, which shows the urgency of a change in: the allocation of health spending, the coherence between the regulations and the reality in the which refers to public policies, that since Law 100 in 1993, Resolution 2358 “National Mental Health Policy” in 1998 and until the enactment of Law 616 of 213 “Mental Health Law”, have had a significant advance but not achieve the expected fruits due to structural variables of the system and social and others associated with the implementation and structuring of mental health care models characterized by:

Our current care models are focused mainly on the care of the sick and diagnosed patient, 60% of the public spending that is assigned to mental health is destined to hospital care (3) and to the sick patient, the services that the patient receives are mostly scarce, disjointed and fragmented, in terms of promotion and prevention activities, as well as the results are almost nil, given the very general guidelines, the absence and / or scarcity of services with this approach within the Primary Care Models , which guarantees the provision of services such as: specific psychological therapies, support groups, group education activities with a focus on prioritized pathologies, therapies for social and occupational rehabilitation, work reintegration programs and last but not least the disarticulation of the actors (EPS, IPS, government agencies, NGOs and communities) that generates fragmentation of services and r Educate comprehensive care.

Recent studies have shown that actions can be projected to improve mental health, understood by Law 616 of 2013 as a “dynamic state that is expressed in daily life through behavior and interaction in a way that allows subjects individual and collective deploy their emotional, cognitive and mental resources to move through daily life, to work, to establish meaningful relationships and to contribute to the community ”and based on the fact that the mental health of an individual and a community is transformable (2 ).

The following international strategies have proven to be successful in promoting mental health, preventing some specific mental problems, identifying and treating in a timely manner those who require mental health services, and facilitating the implementation and enforcement of the mental health law in the world and therefore can be a reference to work for the fulfillment of Law 1616 in Colombia (2), see box Successful strategies to promote mental health and prevent and identify mental health problems early.

When reviewing the different strategies we can conclude that:

1. Their pillars are the promotion and prevention of mental health.
2. They are based on a Community Mental Health approach.
3. They develop collective intervention activities aimed at specific populations and needs.
4. They tend to guarantee access to services.
5. They are developed mainly through educational activities.
6. They seek to eliminate the social stigmatization of mental health and to get people to ask for help.
7. They aim at the early identification of risks and their timely approach throughout the life cycle and all its areas, home, school and work, which allows a greater comprehensiveness in care.
8. They require the participation and articulation of the actors of the system. 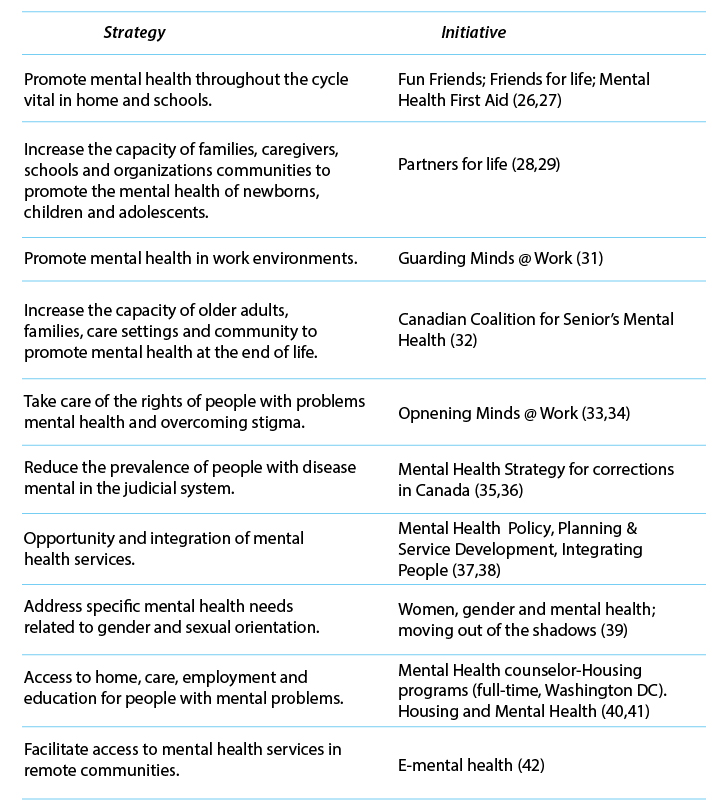 Given the arguments we can conclude that:

1. The Models of Mental Health care in Colombia require a structural change that responds to the growing needs of mental health in the country, with a focus on community primary care, based on the pillars of promotion and prevention, which includes group education activities for groups. and specific needs, according to prioritized pathologies, guaranteeing comprehensive care and articulated work with the different governmental and non-governmental entities and organizations interested in mental health.

2. The investment and structuring in Mental health models with a community and preventive approach leads to better health results and therefore contributes to the decrease in health spending, the protection of individual income and the productive capacity and income of the country.

3. The mental health system in Colombia before Covid 19, which had already been facing financial difficulties and now with the growing demand for services, must be experiencing even more critical situations with existing financing and efforts aimed at other places than prevention.

5. Investigative Team of the Health and Social Security Program of the Ombudsman’s Office. Mental health in Colombia 2008.